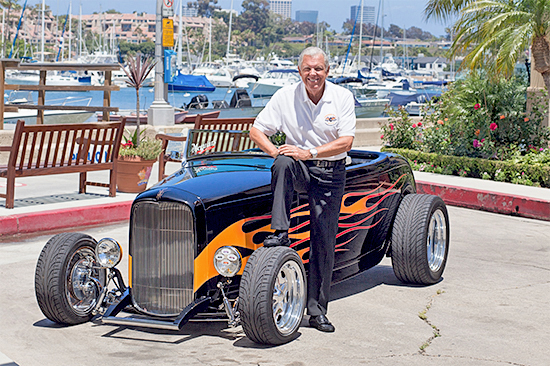 Barry Meguiar is the Founder and President of Revival Outside the Walls and Ignite America and is heard daily on over 800 Christians Radio Stations in 47 states with his “Ignite with Barry Meguiar” radio features.

He’s also the third-generation President of Meguiar’s Car Wax and was the Host of Car Crazy TV for 18 years, which aired globally on Discovery Network.

He’s been honored by the Assemblies of God and Pt. Loma Nazarene University as their Layman of the Year, was given the Moody Bible Institute Legacy Award, and serves as Chairman of David Wilkerson’s World Challenge Board.

For more than 40 years, Barry has used his business as his pulpit to move everyone, every day closer to Jesus . . . in fun and exciting ways that offend no one. The difference is striking between sharing your faith out of obligation and experiencing it as the most important and fun thing you do!

The scriptures are being fulfilled before our very eyes. While 86% of the unchurched would like for someone to tell them there’s a God who can make sense out of America’s chaos, only 1% of us are telling them.

The fields are white for harvest . . . but the laborers are few! How are they going to know unless someone tells them? Christians have stopped sharing their faith, leaving the majority of Americans lost in darkness and blinded to the truth of the Gospel. It’s self-evident in every newscast.

IgniteAmerica.com is neutral ground . . . the only website in existence focused solely on the ministry of its visitors. It’s impossible to use this website for fundraising or to connect with or fund ministries. This allows all broadcasters, ministries, churches, and lay people to use IgniteAmerica.com without reservation.

IgniteAmerica.com is filled with inspiring videos, featuring well known pastoral leaders and lay people, telling their amazing faith-sharing stories. This is a site loaded with every tool possible to ignite, train, and connect faith-sharing Christians with each other, bringing the Body of Christ together to Ignite America with Revival!

Sign up to receive show information and more from Ignite America

We'll never share your name or your email. Opt out at any time.